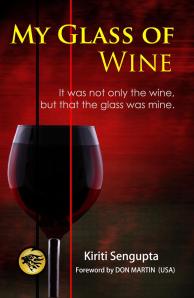 For more than a decade we hardly have a Kolkata based author making it to the bestselling list of English-language titles. Sengupta made it finally with his latest book, My Glass Of Wine that has been declared a bestseller with Infibeam, one of the leading online stores in India. Kolkata based Dental Surgeon Sengupta is a well-known bilingual poet. He has also done several translation works both in Bengali and English. Sengupta’s earlier works have been published in a few e-zines, and in Tajmahal Review, Kritya, The Hans India, and in international anthologies: Heavens Above: Poetry Below (Canada), and Twist of Fate (U.S.A.).

Sengupta is back with a bang with his new book, My Glass of Wine. We hear people say that nonfiction literary works enjoy not so much readership.  In the past, Kiriti Sengupta shattered such notions with his other books, The Unheard I, and The Reciting Pens. These titles have been widely reviewed worldwide, and have been highly appreciated.  Despite limited availability of copies, Sengupta could find his niche in global English literature.

As said, he is back with his scintillating novelette, My Glass of Wine— at best it can be described as ‘autobiographic poetry,’ since  Sengupta  urges: “It was not only the wine,/but that the glass was mine.”  Publisher, Author’s Empire (New Delhi), is all set to gift the world the latest from Sengupta’s basket. As bestselling author-editor Don Martin (U.S.A.) has honestly written in the foreword: “…One thing I learned is that Kiriti can be a poet of few words. I actually admire that! I see too many poets who try to be flowery just for the sake of being flowery, like they are being paid by the word or something. Not here! Kiriti uses just enough words to put his meaning across, and that’s it! You pretty much get what you see, and reading a Sengupta poem is not in the least bit tedious. It’s a refreshing change!”