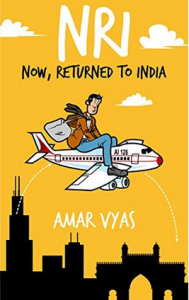 NRI – the does the term sounds familiar? Yes, of course; it would and why not when there is at least one (and more) non-resident family member(s) in every family today. The term might not be as electrifying as it was a few years back; when it was a RAGE; going and settling abroad. Almost, every second Indian seemed to be catching a flight to their dream destination – America but the case is not the same today. This story dates back to those years when NRI was expanded as ‘Non-resident Indian’ unlike ‘Now, Returned to India’; as it is today.

Working abroad has been dream for countless number of aspirants (it prevails even today) but stark reality is not all those who get a chance to work there CONTINUE to work there! Sad, as it may sound, people do come back (though in different scenarios) only to feel regretful for the decision made. No, I am not bragging the system ka rona dhona wala melodrama. The stark reality is; even if a bunch a people dare to take such a decision, they are left to nowhere and they tend to forget about their whereabouts.

I have a big list of relatives and friends who enjoy their NRI status. It is a fun filled chat when I find out that though they wish to return to India; they are afraid and give in by deciding to stay abroad only. I am sure; many of yours would be sailing on same boats. Have you ever tried to give a thought as to why do they have such limited aspirations? Well, in my opinion, the basic reason is they wish to hide their turmoil and tribulations from us – the Indians who have never been abroad, at least for residing purpose. Yes, I agree that systems work better there but then every country has its shares of positives and negatives. It’s just that they do not wish to accept it, especially the negativities, straight on our faces. This is because they showed us their back hoping for green pastures on foreign land but the soil is more fertile and land greener here.

I find the author taking a dare in deciding to share his nitty-gritty with the readers. Let aside the realities, read it for fun. Every story and every journey need not inspire and motivate us to stand and fight back. A few provide us a moment to sit back, chill and relax to enjoy what we might have missed while turning tides. There are no hard feelings or messages against any country, religion, system, party or person it is just his memories being revived. Recall yours and give it a laugh! Not every book needs to have a message driven story; sometimes the mere attempt is complete in itself. This is one such case.

Being completely inspired from true life events; it itself becomes a mammoth task to rope in all the developments and emotions and yet maintains the fiction factor to give it a shape of a story book. Inspired by his own story, he shares u what conditions his protagonist decides to come back to India only to find out that Indians have a long way to go before they could claim to be a developed nations providing equal opportunities to all and workable conditions in India. Until then, we need to ride a roller-coaster; thus tighten your seat belt as we are destined to reach new heights on our mother-land only.

I recommend this book especially for the NRIs. This is because they will find that they are not alone in the pond, there are countless more sailing on same boat catching small fishes while hoping for a big catch.

Moving back to India was the last thing on Amol Dixit’s mind when he was leading a carefree life in Chicago. Then one day, he found himself sleeping on the streets of Mumbai.

Now, Returned to India is a Back-to-Rags story of a Non-Resident Indian (NRI), and is humorous tale of woes haste. It all begins when he interviews for a job that he doesn’t really need, and then moves to India. He plans to North America. However, a series of missteps throw his life in a turmoil, and even cost him the woman he loves. In short, Amol learns the hard way that living in India is no cakewalk. Inspite of these challenges, he decides to stay back in India. And just when his life has hit rock bottom, GB enters his life…

Now, Returned to India was shortlisted by DNA – Hachette in India for their “Hunt for the Next Bestseller” competition in 2014. This is the first book in the four part series by author AMar Vyas, and is inspired from Amar’s own blog which received over 100,000 views on the Return to India Forum (www.r2iclub.com).

Amar Vyas is the pen name adopted by the author Amar Deshpande. Amar dabbled in the construction sector in the United States for several years before he returned to India in 2008. Two years into his Indian adventure, he hung up his construction boots (and hard hat), and went to the Indian Institute of Management, Ahmedabad for his MBA.

A self-described nomad, Amar has lived in ten cities over the past twenty years, including the two years he spent as a graduate student at the University of Illinois at Urbana Champaign. Most recently, he has moved with his family to Bengaluru. In his spare time, Amar likes exploring offbeat places, learning Gujarati from his wife, and spending time with his newly adopted pet, buddy.

He can b contacted at: