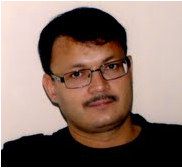 which he was imprisoned. Prior to this he was a successful Chartered Accountant and worked with world’s largest consultancies. He is a co-author in several books on taxation along with his father.

Four Friends is his first fiction novel. Writing fiction was his hidden talent, and the prison gave him a fertile ground to flourish. Inmates gave him real stories. It took him four years to write, re-write and review this work. He wrote the novel during his 63 day parole release period.